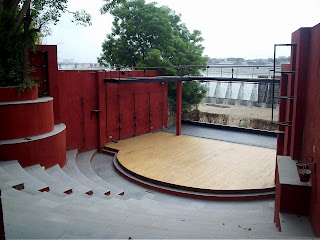 In 1994, Darpana’s amphitheatre Natarani, Gujarat’s only state-of-the-arts venue, came into existence to give local audiences the opportunity to see world class performance, and to give artists a platform to build on. Each year Natarani presents close to 80 events, including dance performances, concerts, plays, cultural programmes and films. Natarani’s café offers young writers, poets or music groups its space to hold informal performances, jam sessions and readings. The open gallery space allows Natarani to host thematic events encompassing live performances, craft demonstrations and sale, sculpture and painting exhibitions and specialty food at the café go with the theme.

No other private arts institution in India had the facilities available at Natarani. The campus, the theatre, the artists, the technical equipment, the rehearsal rooms, the library of books, music and videos, the workshop, and perhaps most significantly the mind set. This made it unique for opening it out to the artists and creators of the world who wanted to break out of technique bound institutional or performance set ups and have the possibility of working with artists of different trainings, nationalities, sensibilities and goals.